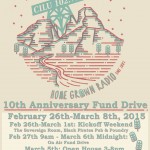 Tonite at midnight and again this Saturday night at 1am, we’re taking a listen to a ton of really awesome Canadian music on the Revolution Music Radio Show on CILU 102.7FM.  We’re playing the entire Crush Your Canadian Idols compilation that came out in 2006 on Capital Kill Record.

Don’t forget to support CILU Radio by going to luradio.ca/fund and pledging your support for the station. The station is the only station in town that depends on community support by super cool people like you. Every person that donates gets their name entered into a draw for some really cool prizes and everyone who donates over $10 gets really cool perks like signed postcards, mixtape cd’s, posters, t-shirts and much more.

For $20, you can pick up the Revolution Radio 2015 Mixtape CD which includes a ton of really cool Canadian heavy metal and punk rock bands. Email me at revolution1027 (@) gmail.com if you want to hook up with a copy and go to luradio.ca/fund right now to pledge your support to the station and check out all the awesome perks. (Site goes live this Thursday). You can also call (807) 343-8881 to pledge your support over the phone.

Also, check out all the awesome events that CILU is holding across the city all week. Go to the facebook page for the CILU Fund Drive to find out about all these great events.