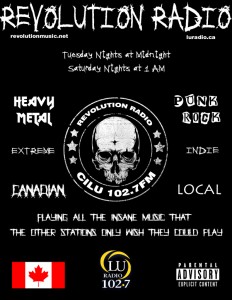 Welcome to the new website for the Revolution Music Radio Show.

The Revolution Music Radio Show originally aired for the first time back in Sept. 2005 on Thunder Bay’s CILU 102.7FM. Since then, the show has attracted a large audience due to our focus on extreme metal, punk rock and other independent styles of music that regular mainstream stations do not play.

The show is currently on every Tuesday night at midnight and every Saturday night at 1am (Eastern Standard Time) on CILU 102.7FM in Thunder Bay and streaming worldwide at luradio.ca

The show is hosted by Dr. Destrukto, a long-time local musician that has played in and produced a huge amount of punk and metal bands.

We are currently airing primarily local punk and metal bands from Thunder bay as well as Canada.

We have had a variety of guest co-hosts over the years, including Camden Blues, Ted Lee, Randy Young, Richard LeBlanc, Justin Miller, Chris Baker, Aaron Ranta, James Laukka, Kevin Kuokkanen and many more.

Don’t forget to send us emails to revolution1027 (at) gmail.com with comments, requests or complaints. You can also like our Facebook page at facebook.com/revolution1027 for up-to-date information.

Stick around, man … it’s sure to be a crazy show.